We're on day eight in Malaysia, two more than we were originally supposed to be here and with a fair number to go. I imagine a lot of people back home are confused by a desire to stay in a city so under the radar for longer than intended especially when we chose to forgo places like Tokyo and Beijing. I admit those places are certainly more adventurous but, as mentioned before, it's exhausting just thinking about flying all over Asia again.

So instead we have been playing the unusual role of living a local mundane life while on vacation. We get up in the morning to exercise and get breakfast. We try to aim for one or two activities or attractions in a day. We do a simple salad for lunch with the work crowd. The afternoon is spent catching up on work for the one of us that has to work (and these updates). Sometimes we hang out by the pool for a bit and enjoy the warm weather we know will soon be long gone. The day wraps up with dinner and we're usually back to the room around 9pm.

We have visited the botanical gardens and a curious tree-top walk "national park" nestled right in the center of the city. We are become experts at navigating the city's network of underground paths and skybridges to keep us off the sidewalk. Street walking here is not very common and often Google suggests a route that takes significantly longer than the distance would suggest - I don't test Google's knowledge in these situations. 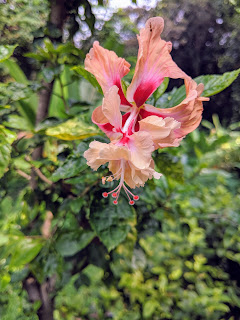 One of the more mundane activities of late was my visit to a barber shop. I haven't been to one in probably two years because I grew tired of paying someone $20+ to shave my head when I could do an almost-as-good job myself. I stopped in a modern men's barber and tried my best to explain the simple "buzz cut" I wanted but I clearly didn't do the best job. What I ended up with is the style of haircut everyone here has, a heavy fade. The good news is I don't really care as it will grow out within a couple of weeks. It's really not that bad a look, but it is definitely not me. Best of all none of you will get to experience it in person. Nonetheless they spent a whole hour on my head that could have been done in ten minutes; it was quite luxurious.

We are currently scheduled to leave for New Zealand on July 8th but we are keeping a close eye on any potential award flights that open up. We are very much trying to get an extra four night stay somewhere else, be it Australia or nearby in SE Asia like Bali. Unfortunately its a waiting game and not one with any success to this point. If something comes up you'll hear about it right here.
Labels: Asia Malaysia