Having a Whale of a Time

Greetings from Kiakoura, a tiny coastal town known for its whaling past and eco-tourism future. We arrived here yesterday morning and went right to the main attraction - whale watching.

Before we get into Kaikoura here's a recap of the last couple days in Christchurch. On Friday we took the bus to the Christchurch gondola, which is a generic cable car designed to take you to the top of the a nearby peak for scenic views of the Canterbury plains and southern alps. We opted to hike to the top on what was supposed to be a fairly short and steep track. No more than ten minutes in to the trek we discovered most people were opting for a far steeper straight-line path following a pipeline. While this route was probably not intended for human traffic it definitely looked more challenging so we decided to try it.

It was exhausting and it dropped us off on a summit road that was pounded by gale force winds but we did indeed make it to the top and as a bonus we got to take the trail down the backside into a small harbor village conveniently named Lyttleton. We stopped for lunch and coffee before taking the bus back to Christchurch.
Saturday we visited the local farmer's market for some snack items which were consumed before photo taking. These included arancini, empanada, and a cinnamon roll. The market is well known and quite crowded despite being outdoors in winter.
We got up early Sunday for our bus ride out to Kaikoura. Riding buses here has been a pleasure that would never pass in NYC. Drivers constantly change shift mid route which requires a few minutes for them to pack up and say goodbye (everyone on the bus says goodbye too). Our inter-city driver was extremely friendly providing updates on weather, scenery, timing, and suggestions for getting snacks and drinks during the comfort break. None of these things would go over on a local Megabus.

Arriving in Kaikoura, the town is as magical as one could hope. Despite the clouds overhead, strong winds, and imminent rain you couldn't help but find it beautiful. There are enormous mountains right up against the sea. 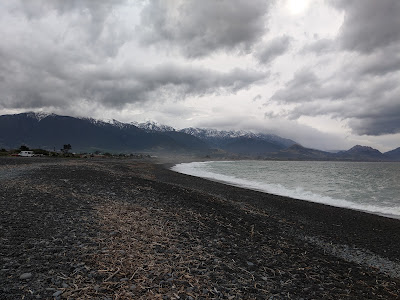 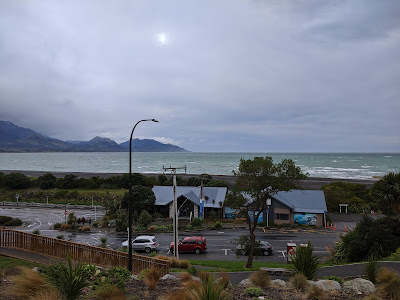 Then the stars of the show came out. We went whale watching which is something we don't have best track record with and it was perfect. 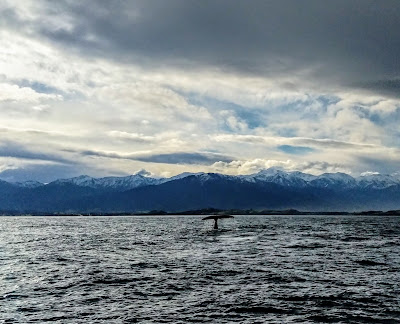 Sadly there isn't much to do in Kaikoura and most people just stop for whale watching on their way through. We planned two nights in case we didn't see any whale the first night so here we are on day two looking for activities. We took an extensive coastline walk to a seal colony and BBQ seafood stand. We found some adorable and lazy seals and had a great freshly caught bluefish meal while covering around seven miles on foot. 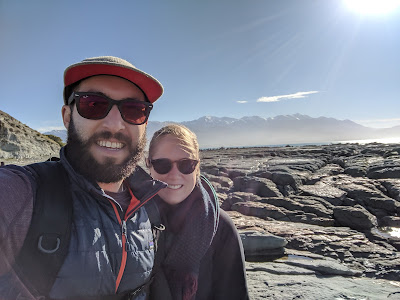 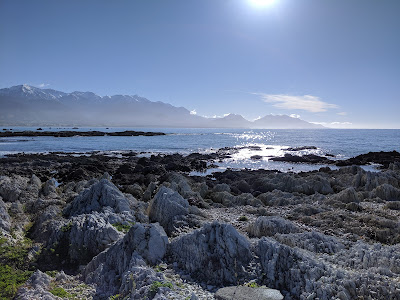 We are going to have to dig deep to find something to do tomorrow morning before our bus up to Blenheim where we hope the weather will cooperate and allow us to do some biking and wine tasting. After that quick stop we are off to the windiest capital in the world, Wellington NZ.