We arrived in Tokyo today. The last couple of days in Osaka were pretty laid back in part due to the oppressive heat and the torrential rain on and off. We did however manage a venture to the Asahi brewery which was quite the experience. It was a scorching sun filled morning and we took the train to the empty suburb of Suita where the manufacturing plant was located. After walking around the factory edge we finally found a guardhouse. They were delighted to have us and asked if we made a reservation (which we tried to do, but nobody picked up the phone). Not to worry head straight to the visitor center we were told.

I've done a fair amount of brewery tours before but this was a model of efficiency on its own. The guides kindly provided us an English audio guide to listen to while they performed a probably much better Japanese version. We were indeed the only English speaking folk on the tour and it was still a great time. The locals, much older than us mostly, were having a great time. While this was a Saturday and the facility wasn't working at full force you still got to see the enormity of the place. At the end of the tour there is a tasting. It is so curious how they devised this system and I'm going to try do it justice.

First they warn you absolutely no drinking if you drove a car to get here (most people appear to have come via tour bus, except us who took the ever-convenient JR). The same goes for the expecting mothers (none, apparently). You then queue for beer one, a "super cold, super dry" Asahi. It happens they have a two tap system, one for beer and one for foam - making the perfect appearance. At this moment the clock starts: you have twenty minutes to finish beer one and claim two more, but no more than three total. Nobody is actually watching this limit - but also three beers in twenty minutes?! Well trust me most people managed to do it - we thought two was plenty.

The beer was what you imagine. Different variants of generic, but that's what makes domestic beer great in its own way. We headed back to Osaka and the storm came in right away justifying our desire to nap and stay in before heading to dinner.

Anyway, we left the land of businesspeople and here we are in Tokyo, land of tourists and only the hippest. We ventured off to Harajuku and Shibuya right away and the crowds were beyond explanation. People lined up on the street twenty deep to enter the subway station. Hopefully it is just a result of being Sunday and we will try again tomorrow.

We also stopped at a craft brewery outlet for the first time. I had seen and had their offering at the local convenience store Lawson so it was neat to try something other than their staple choices. My first thoughts on Tokyo are so different than Osaka. It is super navigable, very crowded and evidently more global than Osaka -where often we were the only foreigners. The hotel room we have is a shoebox but adorable and the staff are great (they gave me a father's day gift, undeservedly perhaps).

We're only here for two days because as mentioned in the preview I wanted to maximize our miles and flights (stupidly) so there will be little  to see on this trip through Tokyo before we leave for Hanoi. One thing worth noting, we flew here as opposed to taking the Shinkansen. I think that was a mistake in some respects and a good choice in others. We got to use the "Diamond Premier" lounge in Osaka international airport which is lovely as is much of Japan's luxury spaces. That being said there isn't much to do there but watch planes from the apron (which I'm totally okay with). Missing out on the bullet train experience is something I'm okay with but I would love to do it in the future.

As seems to be the trend, enjoy some photos from the last couple of days in Osaka and our first few hours in Tokyo. We will update from the First Class Lounge in Narita (it has a sushi chef and sake bar). 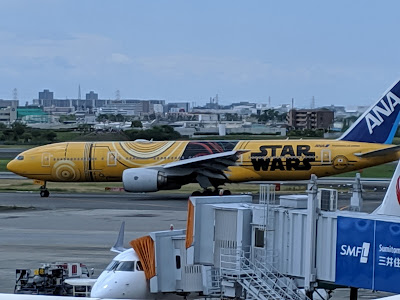