Hello from Osaka! As previously mentioned just a short bit ago in our last post, we have made our way from Singapore to Japan, where we will be spending the next week. I find no need to elaborate too much, since Brendan has summarized it quite nicely, but wanted to add a few highlights + talking points he may have missed.

I don't think it's sunk in for either of us yet that we aren't going home anytime soon. Besides the aforementioned sink laundry and Brendan's ongoing concern that we will run out of money, so far this trip has been pretty similar to those we've taken previously. We've been getting our steps in (my goal is 20,000 a day but realistically we're more like 15,000 steps a day people), eating a lot of really great reasonably priced food (and some mediocre mall food I chose in a moment of hanger and exhaustion), and having a lot of "I have no idea what we're supposed to do here but lets just go with it" moments. 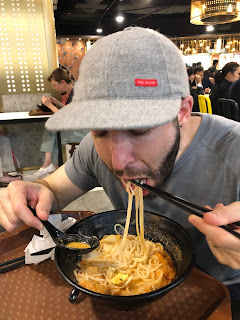 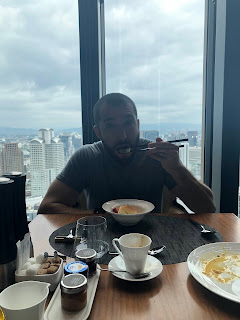 Today we spent the afternoon in Nara, a city about 45 minutes outside of Osaka. It is known for its super-cute deer population, which walk around and greet you (provided you have food). Brendan's post shared the pictures of me attempting to feed the deer*, so here are some better pictures of just the deer. 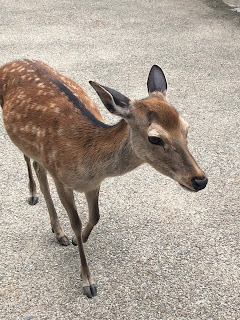 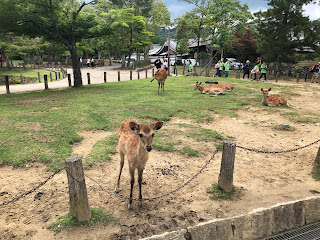 The highlight of the day - wandering (and hungry) deers in Nara, Japan

Before I end my entry post, I'd like to take a moment to highlight the free breakfast here at the Conrad. To those who don't know, I LOVE a free breakfast. Free english muffins and weak coffee at the Hampton Inn? Love it. Free assorted regional and Western breakfast items at the Hilton Garden Inn? Love it. However, the breakfast here at the Conrad Osaka tops them all (obviously). Coming in at a whopping $31.28 (3400 Japanese yen) for those who are willing to pay for it (or don't get free breakfast), this buffet is actually probably worth every penny. First, not only is there the buffet, but there is also an a la carte menu that you can order your eggs (ie omelettes or eggs benedict), sweet breakfast items (ie waffles and pancakes), or Japanese breakfast items like rice bowls from. There is also a lobster tail you can order for breakfast but that'll put you back an extra $5. Second, the actual buffet is solid. There are Japanese-style pancakes, an assortment of delicious breads, a salad bar with the most beautiful watermelon radishes, super fresh fruit, and an assortment of delightful Japanese foods (even sushi). At one point Brendan mentioned getting up early and skipping breakfast to head to an adventure outside of the city, but now that we know what we'd be missing, I don't think that's going to happen. 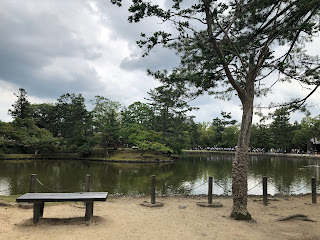 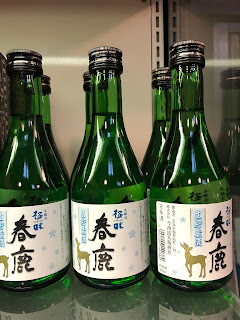 Clearly I am one for marketing - I loved these tiny sake bottles at the tasting today!

Last - if you are so inclined and don't already, follow along on our Instagram: oneworldleftbound. I have been put in charge of it and try to upload pictures and stories daily with some of the less exciting things that don't tend to make the blog.


*Please note that I know how embarrassing and awful the photo of me with the deers was. When I told Brendan that, he informed me it was "the best (aka least worst) one of them all" and thats when he reminded me that if I don't like what he puts on the blog, I can do it myself (hence, here we are).
Labels: Asia Hotel Japan