How Loud is a Pin Drop

What I found most unbelievable through much of Tokyo was how quiet it can be during the day for a city of such magnitude. Even walking around the business district of Chiyoda during the work day everyone was mum. It isn't a lack of people per se but rather an inherent need to be quiet while moving about. Its quite a nice change of pace from New York where honking becomes background noise after a while. With that being said it is worth noting the taxi drivers here are unapologetic about their speed and your space. Many of Tokyo's smaller streets lack a real sidewalk and the cabs seem to find they possess all the street. Likewise, crosswalks are taken much more seriously here with very few people jaywalking - even on some of the smallest of intersections.

We spent the last couple of days in Shinjuku, Harajuku, Shibuya, Chiyoda, and Roppongi. Each neighborhood's central business district could be another city's downtown. The design of the neighborhoods and inter-accesability make everything seem much closer than it really is, so much so that Tokyo doesn't really seem as walkable as it may be. That will be no comparison to Hanoi and Da Nang, which I can imagine are nowhere near as pedestrian friendly before taking into account the predicted 100 degree heat. Fortunately where taxis in Japan are absurdly expensive they are ultra-affordable in Vietnam. For anyone curious the fixed fare from Narita to Tokyo center is just under $200.

The return trip to Tokyo should provide us a greater chance to explore some of the other neighborhoods east and north of the city though we have debated the merit of just canceling that return venture and doing something else. Tokyo is surely a place we will visit again later in life should that be the case. It's a great city with a far more English friendly aspect than I had originally anticipated. 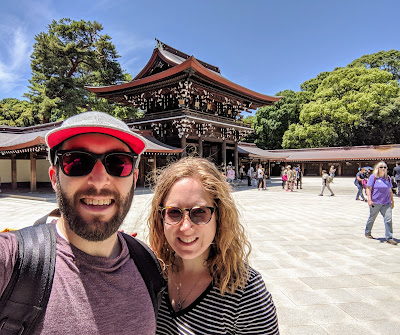 The First Class lounge here is also quite calm at the moment with the exception of the ramen slurping - something I think is a hideous trait for a country so fixated on manners. The sushi bar is outstanding and seeing the high quality sashimi being sliced before your eyes (in an airport) is a real treat - and yes it was amazing. So much for all those airport sushi jokes.

There are also automated self pouring beer machines that properly tilt your glass and add foam at the end of the pouring. I guess for a place like this it is to be expected. The sake bar allowed us to sample three variations of which we could tell you zero for tasting notes but hey we are willing to try all the sakes.

We're taking a 787 Dreamliner to Hanoi, the first one we have been on in quite a while and the first in business class ever. Being this is a daytime flight I'm looking forward to watching some movies and enjoying the food & beverage service unlike the last flight which we tried to sleep through entirely. Don't forget to keep reading (or subscribe! if that even works).