After a lovely visit to Tokyo (and a lounge visit) we made our way to Hanoi, Vietnam on Tuesday evening. Despite Brendan's multiple warnings about the heat situation, I was still surprised when we got out of the car at the hotel and my glasses fogged up from the lovely heat+humidity combo at 11pm at night. I think we've started adapting a little better to the heat but its probably safe to say that "feels like 114 degrees" temperatures aren't really for us in the long run. 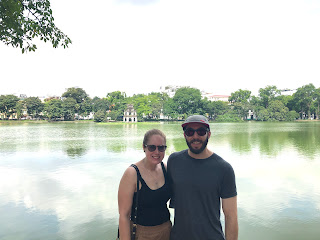 Hanoi is a busy, bustling city but unlike any other we've visited yet on our trip. After reading many accounts of the difficulty crossing the street, I figured the best way to get the lay of the land would be to book a walking tour of the city on Wednesday morning, mostly so we wouldn't have to cross the street for the first time by ourselves. Our (free) tour guide, Rosie, was delightful although as previously mentioned there was a bit of a language barrier.  We were able to learn a bit more about the history of the city and culture of Vietnam which was nice. I also thought this was a group tour but alas it was just Brendan and I which put us in the position of having to be pleasant for 3 hours straight and not having the ability to hang back and complain about the heat to each other.


We also booked a food tour for Wednesday night - in hindsight two 3-hour walking tours in one day may have been a bit too much, but at least this one involved food + beer. The food tour was excellent, our tour guide was lovely, and there were three other folks on the tour with us which took some of the chat-pressure off of us. One of the stops took us to a restaurant that served pho, where Brendan and the rest of the group opted for the 'unique' broth-less pho and I rebelled and ordered hot soup in 90 degree weather. This is when I realized that despite my immense love for this soup it is much harder to eat it sitting in an un-airconditioned, open air restaurant when its 90+ degrees out than it is at my beloved Saigon Shack (PS if you are in NYC you should eat there).  Tonight the plan is to eat some pho and just deal with the fact that I'll be overheating from my soup.

The last couple of days have been a bit less hectic, which has allowed me to get some work done. Speaking of work - do you want to read a great article? Here is the link. Although its technically "summer vacation" for me, I've continued to work on ongoing research projects and papers, in addition to the big qualifying paper I've been tasked with writing this summer. So far I've been pretty good with my time management (quite the surprise to basically anyone who knows my work style) and hopefully it'll continue to work out.