As many of you may have noticed I posted an Instagram story update that showed a bedroom with some loud noise in the background. To be fair my phone sound is rarely on for fear of it being broadcast publicly so I would not blame anyone who just thought I was showing off my cool new room.

Well as luck would have it our impressions (read: frustrations) of the area we were staying in became validated when we woke up Monday morning. Taking a step back, when we checked in to the apartment-hotel there was a note mentioning local construction which would be going on for a couple more days. They sincerely apologized for the issue and promised it was out of their control - nothing could be done. My initial and pessimistic reaction to Lynden was "I wonder how long that has been there" assuming the tenants are never there long enough to know better. Anyway we dismissed it as the construction outside our window which was harmless for the first two nights (and pictured in my previous post).

We were dead wrong. Around 7:15am, literally minutes before our alarm was set to go off, the room began shaking. It was a jackhammer on the building next door. It was actually the wall of the room next to ours that was probably inches from the construction site on the top of the adjacent building. We had already been debating leaving the place due to finding a small gecko and some ants in the unit (which didn't really bother me as much as would a cockroach or worse) but this sealed the deal. I was furious. We left the building shortly after since it was uninhabitable and I happened to notice the couple staying in the unit next door walking out as well so I asked them how long they had been hearing the noise - one month! Turns out they were on a year long lease (so much for a three month vacation) and the building wouldn't budge on making it right with them. They mentioned having been forced to spend much of their weekdays out of the apartment because they couldn't spend time in the room during the work hours. Having them confirm the issue was not temporary only incited me more.

After demanding a refund I was surprisingly offered the exact amount owed (in cash) as well as asked to not leave a bad review (we'll see about that). I've come to realize that while these issues can arise there isn't really much recourse we would have had in the instance they denied my request. I know nothing of the local noise ordinance laws or decent living situation requirements and the reservation we made was non-refundable. Not to mention as foreigners in a socialist country I have zero understanding of my rights.

We took the cash and ran to much more peaceful Hoi An. The town, about a half hour south of Da Nang, is known as a picturesque trip back in time to an older Vietnam complete with small pedestrian streets and preserved storefronts. The streets are lined with lanterns that light up at night and the river is filled with small boats offering tourists the perfect Instagram shots. I think its a lovely place but sadly it is overrun with tourists and pedestrian is a term used lightly as many motorbikes still weave their way through the narrow alleys throughout the daytime.

We have certainly enjoyed the last couple of days and even had a nice experience our second day in Da Nang. On Sunday we spent the day at the beach which is a rarity for me. We rented a couple of beach chairs, sat under an umbrella, and even went for a dip in the bay. Sunday night we took a taxi into the city center for drinks and dinner. We then took in the local attraction of the Dragon Bridge breathing fire and water which happens at 9pm twice a week.

Monday and Tuesday we spent wandering the old part of Hoi An getting coffee, snacks, and joining the local fashion trend with a banana shirt. We also spent a few hours each day by the hotel pool. The total of 8 nights in Vietnam have been unproductive by our usual standards. I blame it mostly on the unbearable heat and secondarily on the unexpected need to move locations mid-trip. We really wanted to see some of the destinations further out but didn't have it in us. One thing we both agree on is Vietnam would be significantly better in the winter.


Tomorrow we leave for Kuala Lumpur and are looking forward to starting fresh in a new country where the expectations aren't as high. While the weather there won't be significantly better it will be cooler and there will be more air conditioning. There was also be a greater understanding of public infrastructure making it the kind of city we prefer. Sadly we will be saying goodbye to dollar beers and the millionaire life.

P.S. one funny thing worth mentioning. On Monday morning when we left the unit Lynden went to a yoga class and I went to a local coffee roaster. My goal was to get coffee and use the wifi to find a new hotel. The coffee roaster was clearly labelled on Google maps but unsurprisingly the road turned to dirt and then piles of sand. Determined to not double back I saw a parking lot that looked like it would connect with the next road so I went for it. It turns out that parking lot was the local drivers-test lot for the Vietnamese version of the DMV. Why is this funny? If you have ever been to Vietnam you know the lawlessness with which driving is performed so it pains me to think there is any requirement at all to get a license. I wanted to film the whole thing but didn't want to bring any attention to my presence so I took a casual selfie. It was possibly4 the first instance of someone walking through the test course (and to that end, I probably created the first real obstacle). For those who have been to Vietnam - there was also a test course for motorbikes if you can believe that. 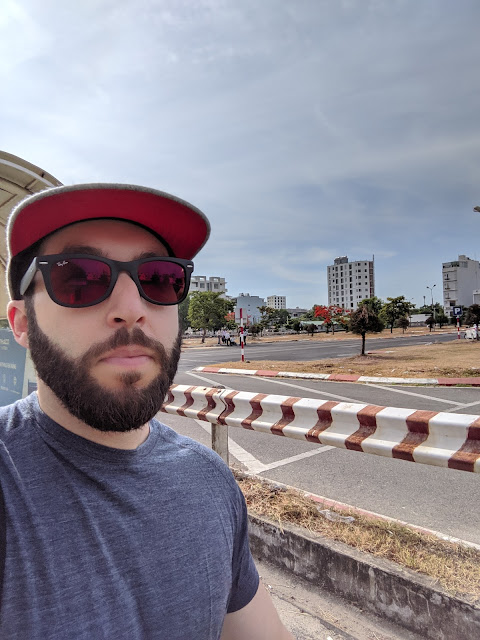