The last stretch of our journey is that hardest to describe due to its constant evolution. What we know is it will take place in Europe, mostly "Eastern", and involves a much anticipated layover in Doha's Hamad International Airport where we will overnight at the lounge. Unclear how "overnight" the stay will feel given our 18 hours of flying beforehand but the reviews of the Al Mourjan Business Lounge seem to make it worth the lengthy visit.

Moving on from the luxuries of airports, we eventually arrive in Budapest, Hungary in the afternoon where we will be staying in a city-center apartment. This should make for a comfortable transition to what will be our second biggest jet-lag experience. Budapest offers plenty of potential for historic sites and a huge change in food culture. The great synagogue looks unreal from the photos - like something you find in an Italian cathedral. And of course, since this is Eastern Europe the beer should be cheap and ubiquitous though extremely different from New Zealand.

Continuing from Hungary we will travel by rail (finally) to Bratislava, Slovakia. I don't think Slovakia is well known for much these days but given how much we loved Serbia I'm hoping the Slavic hospitality has us right at home. This stop is primarily to take advantage of a categorically undervalued hotel in the Hilton portfolio so its more cost saving than anything. We plan on using this stretch of the trip for some additional catching up and relaxing but also taking a side trip to Brno to visit the Czech Republic. Should we get truly bored - I doubt it - Vienna is a short train away.

Yet we can't get too bored! We've already committed to spending the next four nights in Vienna which is surely a city with plenty to do. Having essentially tracked the entire Austro-Hungarian empire we are looking forward to many forts, castles, and different views of the same river Danube.

Practically speaking our next move would be to head into the Austrian alps. We heavily debated the merit of visiting Innsbruck for its convenient location and less expensive euro over Swiss franc. So naturally we landed on a flight to Brussels. I'll explain - Lynden wouldn't take no for an answer when it came to the Swiss Alps and rather than spend 6+ hours on a train it was significantly cheaper to fly to Zurich via Brussels. If we're going to stop in Belgium we might as well see it. During our five night stay we hope to also visit Antwerp and Ghent. If there ever was a country with beer I think I've found it.

So as I hinted, we will then fly to Zurich and connect via impeccably timed trains to Davos - known mostly for its economic forum and less so for why we visit - the alps. This was a really lengthy decision process. While I knew it needed to be Swiss Alps I wanted something affordable (impossible in Switzerland) and scenic. Thankfully a number of Swiss towns offer all sorts of incentives for visitors in the summer (ask me, I'll tell you plenty!). The best about Davos? Unlimited complimentary transit on everything in the region, from the rail connections to the gondolas/ski lifts to the buses. This means easy vertical access to the local hiking which, much to my surprise, can cost upwards of $30 per person per trip in some places! In a country where public transit is so well managed and so (relatively) expensive, free is a luxury.

I'm not here to praise trains and the Swiss, I have no secret motive to care about well managed transit systems 😉. That being said we couldn't leave Switzerland without taking a train through the alps - and so we will. The Bernina Express goes direct from the streets of Davos to the high pass at the border of Italy. Some call it one of the most scenic train rides in the world, I call it the most convenient way to get to Italy. 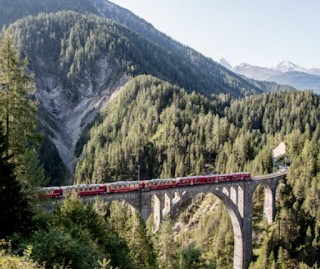 Our final country on this extensive journey is still mostly unplanned. What we know is the train will terminate in Tirano, Italy and while it looks lovely it is probably not a place we want to stay for long. As someone who is extremely detail oriented and needs everything to be fully planned out to a fault it's quite relaxing to have a little unknown. Thankfully late August isn't a popular time for tourism and that will make it fairly easy to find accomodation wherever we decide to go. The one certainty is Rome on September 1st, where we will be flying home to New York.
Labels: Europe Lounges Preview