In the interest of making the overall trip more digestible I've decided to separate it by continent. Part one will cover the first six weeks and is the longest stretch of the three parts. It begins on June 2nd with a calculated risk by taking quite possibly the least practical route to our destination - Singapore. We will be flying from JFK to Los Angeles to Hong Kong to Singapore. This routing is very much intentional in that we are using our earned upgrades on American Airlines in hopes that our economy ticket is bumped to business class. Sadly there is no guarantee we will get that upgrade as it is space permitting - which is entirely defined by the airline. As of now this upgrade is still "pending".

Another major benefit of our routing is allowing us access to many of the premium airport lounges in each airport thanks to our earned status. This includes the Qantas First Lounge in Los Angeles, and the two Cathay Pacific first class lounges in Hong Kong. I'll save the details for these lounges and the many others along the route for future posts but trust that I am very excited to visit them.

We arrive late on June 4th in Singapore where we will be spending five nights. A lot of folks have said that's an insanely long time to spend in a place with so little to do. I think when you have a whole three months you need to move leisurely or risk physical and mental damage. This is especially true when you are also taking on a twelve hour time change. That's not to say we are without ideas on things to do but it helps to have some close friends living there.

From Singapore we head to Japan on a business class award flight using Japan Airlines. We will be spending six nights in Osaka at the gorgeous Conrad without spending a single yen. Don't get jealous - that's our only five star hotel for the entire trip. We will then spend a couple nights previewing Tokyo before flying back west to Hanoi, Vietnam on the same one way ticket on Japan Airlines (thanks Alaska Airlines!).

We spend eight nights in Vietnam split evenly between Hanoi and Da Nang/Hoi An. Vietnam has long been a dream destination for Lynden as the birthplace of pho so expect updates from her. We will be staying in our first AirBnB style lodging while in Da Nang, perhaps an excuse to do some local cooking and eating in. From Da Nang we fly to Kuala Lumpur for five nights. Arguably this is going to be the most leisurely stop in Asia where we will catch up on school work, laundry, personal care, etc. As an added bonus we are expecting some visitors while there which will be a great change of pace.

For those keeping a mental map of our trip you are astute! We have indeed backtracked significantly from whence we started. 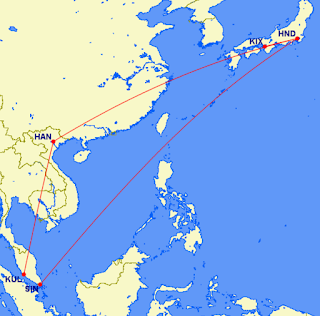 This is also intentional because I just really wanted to take advantage of another one way ticket on Japan Airlines. Having previewed Tokyo we now take in full feature with four more nights of unabashed Lost In Translation craziness. To wrap up the journey we will be flying to mainland China and attempt to Transit Without Visa in Beijing to see the Great Wall and Forbidden City in what will be our last four nights in Asia.

Only July 10th after a whirlwind of flights and sights we will departing Beijing Capital Airport just before midnight headed down under on Qantas en route to New Zealand, also known as part two.
Labels: Asia Flights Lounges Preview